Systemd is used for services control in Debian Jessie, and, there are some problems with some of the services.
One of thoose problems is: VirtualBox doesn’t restart it’s virtual network adapters after system’s wake-up (from suspension).

When does it happens:

What are the signs: 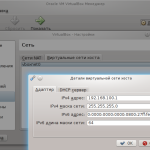 For automation of the process, let’s create new systemd service, which would run when “resume” event is happened (the computer is resumed from suspension)

Put it into /opt/bin/resume-vboxnet0.sh. Contents are simple:

[Service] # Service type = single launch (i.e. it’s not a daemon,
# what starts an stay on the background,
# it’s just a simple bash script that is runned once)
Type=oneshot
# run script resume-vboxnet.sh
ExecStart=/opt/bin/resume-vboxnet.sh [Install] # What services are using this service:
WantedBy=suspend.target
WantedBy=hibernate.target
WantedBy=hybrid-sleep.target
[/bash]

This file should be placed in the /lib/systemd/sys/ folder, under some memorable name, for example, resume-vboxnet.service.
There are all installed systemd services placed in this folder.

Let’s install newly created service, so that systemd load and run it:

Let’s try how it works

Now, try to close laptop’s lid, so that it go to “sleep” (or use some other method to “sleep” your computer), after that wake it up, and lets see, what state is your vboxnet0 network device in.